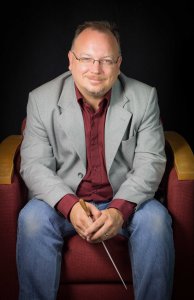 Gus earned his Master’s degree at Butler University in Indianapolis with a double major in Instrumental Conducting and Music History and his Doctorate in Opera/Musical Theatre Conducting at Arizona State University where his dissertation focused on Benjamin Britten as a conductor and musical interpretation. He also holds a Bachelors of Music in Music Theory from Southwestern University.

As Music Director of the Heart of Texas Chorus in San Marcos, Gus is thrilled to be leading this a capella choral ensemble into their next phase as they transition from a men-only group into a multi-gendered chorus. Since assuming leadership, membership has grown by almost 20 percent, and perspective members have increased by over 30 percent.

Gus rejoined the Austin Civic Orchestra in 2014 as Assistant Conductor, having performed with the ensemble on horn from 2002-2007. The Austin Civic Orchestra (ACO) is a high level community ensemble based in Austin, Texas. A finalist for the 2014 American Prize, the ACO performs six to eight concerts per year. As Assistant Conductor, Gus typically conducts one or two works per concert in addition to understudying all performance works. He also conducts the orchestra in the annual Great Waltz Ball for the University of Texas Ballroom Dance Club.

As Associate Music Director/Director of Handbell Ministries at Westlake United Methodist Church, Gus oversees all aspects of the handbell program (5 ensembles), leads the ukulele choir, serves as baritone section leader in the Chancel Choir, operates puppets for Children’s Time, and assists the Music and Worship Director as needed. He also conducts and arranges music for larger ensembles for holiday services and co-hosts the annual That’s Amore variety show fundraiser.

Gus has conducted a variety of ensembles from small chamber groups to full size orchestras, and has worked with ensembles from middle school through collegiate, amateur, and professional organizations on three continents. He has conducted orchestras, opera and musical theatre productions, wind ensembles, and choral organizations. In 2013, Gus received an AriZoni Award nomination for Best Music Direction in a Non-Contract Theatre for Little Women: The Broadway Musical at Arizona State University.

A strong advocate for technology in the classroom, Gus has taught music technology courses at multiple universities, and has been actively involved with the Association for Technology in Music Instruction (ATMI), where he presented a paper on OpenSource music notation software in 2010.

Gus spends his free time playing table-top games with his wife and teaching his two children the finer points of musical theatre. He hesitantly admits to preferring Verdi over Wagner, but always comes home to Beethoven.